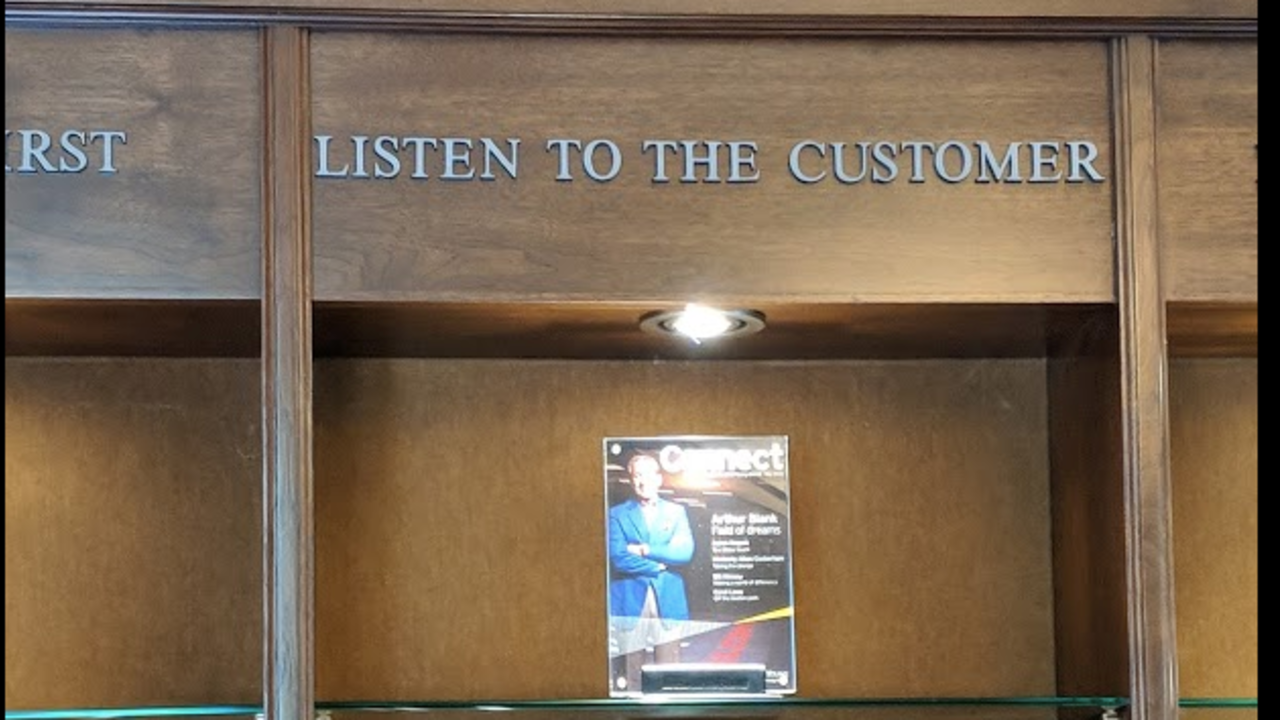 Expeditionary Leaders solve problems and challenges by listening. Sounds simple enough, doesn't it. But the truth is, deep listening requires great humility and belief in the party or parties to whom you are listening. Listening is a key ingredient to building trust.

A year ago I spent some time with Arthur Blank, co-founder of The Home Depot, owner of the Atlanta Falcons, and philanthropist (to name just a few). I snapped the picture above while waiting for my interview with him.

His story mirrored the others I had interviewed for my new book, Outward Bound Lessons To Live A Life of Leadership. And one of the lessons he reflected so deeply was the importance of listening.

Arthur told me the tale of his purchase of the Atlanta Falcons. As he explored the opportunity he met with the professional players and asked them what they would want from an owner. Their answer surprised me.

On any given Sunday only about 60% of the seats were filled.

"Of the 60% that attended, half of the people were rooting for the other team," said Arthur. "We didn't really have any home field advantage." The team wanted fans rooting for them.

When Arthur purchased the team he addressed that first concern raised by his team: get fans in the seats. "So we sold a season ticket for the cost of essentially going to two games," he reflected. "We sold the 40,000 seats, they were gone within two hours. We filled the stadium up with people who were raving lunatics for the Falcons. That made a huge difference to the players."

But this was really only the first step. Arthur next set out to discover why fans had not been attending games. It would be easy to assume it was because of the lack of winning from the team, but Arthur practiced something he has mastered while building The Home Depot. He didn't assume. He asked. He asked the Atlanta community why they didn't attend games. And again, the answer may not be what you'd expect.

"We spent six months talking to the fans, finding out what the issues were," he recounted. "They said we didn’t have enough parking." So Arthur took his leadership team on a walking tour around the Georgia dome. And they went into the parking lot leasing business, negotiating with owners of parking lots near the stadium.

He solved for the problems his customers told him and built a team and an organization that has become a regular playoff team that sells out every game. The valuation of the franchise has risen from $545 million when he bought the team to $2.6 billion. That's a remarkable ROI by any standard.

One of the best examples of the human return on listening came recently from one of his star players. In a sport of giant egos, multi-million dollar contracts and player hold-outs, pro-bowl wide receiver Julio Jones was negotiating a new contract. While many other stars were sitting out or asking for trades unless they got their contract.  Jones showed up to training camp. Why? When asked by TMZ, he replied, "Mr. Blank gave us his word. That's golden."

This is what is built by listening.